The irrational hatred of brands

Even as a die hard Apple fan I like to think I’m able to have a little bit of perspective on some of these things these days. I used to dread going for a job where I would have to use a PC for work but now really couldn’t give a shit as it’s just a tool. I use whatever I can to get my job done. I guess growing up a bit helped me out of that irrational phase of my life of Apple fandom. Whilst the Mac vs PC argument seems to have subsided it’s now iOS vs Android and so on, but this time I couldn’t care less. Use what you want and enjoy it if you like it. Just don’t bang on in my ear about it, especially with some badly researched thing you read on the BBC. I couldn’t give a shit which phone you have. I like mine, I hope you like yours.

This is the same way I don’t really care about what wheels you have or your opinion on my choice of groupset or how many Rapha jerseys you have. If you like the colour that’s great. I don’t want to talk tech on a ride, or ever really.

Recently I was reminded that to a lot of people brands mean a lot and they’re passionately either for or against some as well as spend a lot of time thinking about this. My friend Mathew suggested it was a tribal thing. Being aware of this madness isn’t unusual if you ever read a tech article on the Guardian or such like as you scroll to the comments*.

So the reason for this post was that this graph appeared on Twitter recently which I was kind of taken aback by. 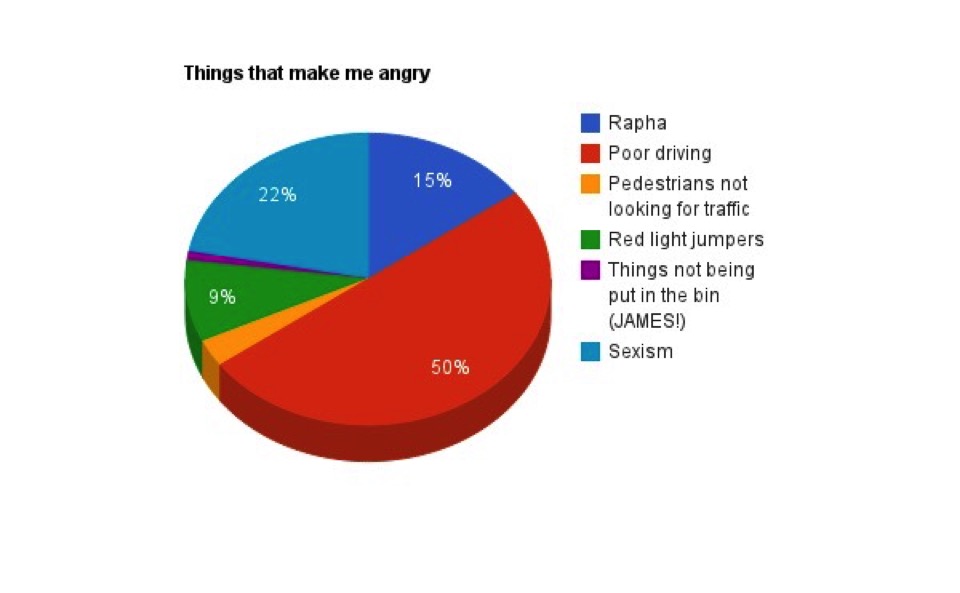 Hold on a second. 15% of your time being angry at Rapha? Wow. I get the controversial nature of the brand and yes I’ve read the occasional Road.cc review of a Rapha garment of clothing and the overt frothing of the mouth that follows from those who prefer to wear a club jersey or like their cheaper clothing brand. Some of which is fair perhaps and yes I’m not mad keen on the ‘suffering’ aesthetic, of which there’s a nice Medium article on. But the clothing is good and I like it which just is a choice. I don’t like Castelli as much but then I don’t proclaim to hate it or judge people who prefer that. I also really like my club jersey from Brixton.

Ok, so I took the bait and replied. What’s the problem with Rapha? 15% seems a lot for an adult to spend being angry at a brand.

Naturally I took issue with this. Not with the membership issue – £200 is a lot and certainly isn’t accessible, if you’re near one of their clubs it’s a great deal on coffee though. But what I took issue with is that I actually learnt to ride in a group on the Thursday morning rides round Regents Park, best of all they’re totally FREE. I made this point but it was ignored as presumably it didn’t fit the narrative of hatred. Not only are those rides free but they even give you a free coffee for turning up. So yes I guess you can pay the golf club membership fee, or you can just turn up on a free ride in your DHB tights and club jersey and go riding. Having been going consistently to these since September I’ve met an amazing group of people through it, a point I again made. Whatever you think of the brand the riding that goes on through their clubs is pretty decent as is the local club scene at Brixton. Both are good and both have their benefits. That illogical hatred and unwillingness to have your viewpoint changed is kind of odd though. Isn’t it actually about the riding?

And then I think to the fact that I’ve been spending a lot of time with my 93 year old Grandmother and think how fortunate we all are to have the time to get angry about a cycle clothing brand for 15% of our lives. We could all do with being a bit more tolerant.

*Adam Buxton beautifully took this madness apart in one of his Bug shows which you really should watch.

I did a lot of driving a few weekends ago and had the phone on the handsfree kit in the van. I thought I’d give Siri a go to play some music, unfortunately it didn’t work out so well. 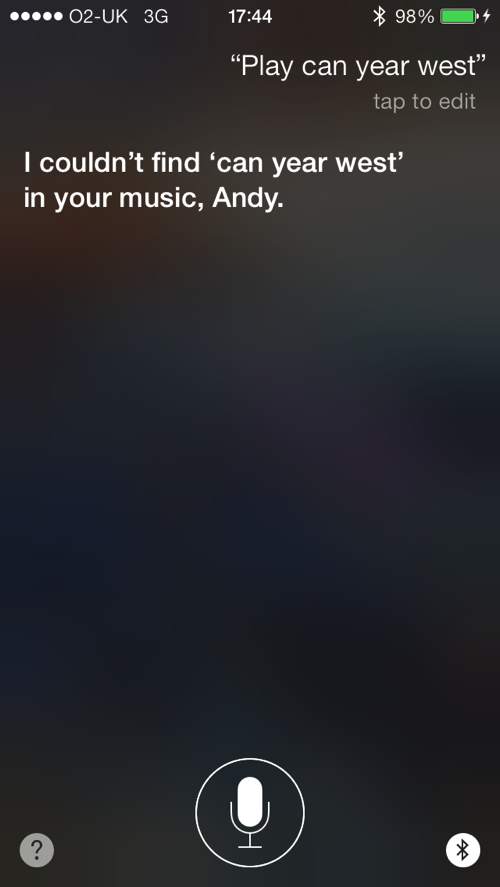 Bitten by a bug

I love computers but hate them in equal measure sometimes. The sense of pure frustration and hatred is so maddening when you come across something that stops you doing what you wanted the machine to do for you, aka a computer bug.

In this instance I’ve been merrily sending emails from my photography account to clients and others and have now only found out that a lot of them haven’t been sending or even filing in the sent items. They just disappear into the ether. Fortunately I’m not the only one as this thread on discussions.apple.com bears witness to, beware it’s filled with despair, hatred and frustration. There appears to be no reliable fix as such with a few edge cases saying delete all mail accounts and so on.

Ahh well a fun evening of deleting and re-adding mail accounts waits. The most maddening thing is that my iPad works just fine.

Hey, I just want to get in and listen to some music a podcast or something. You know, not have to wait 5 mins for you to fuck around with something you could do as a background process.

It drives me insane each time I see that. I want to keep a well kept music collection and have all my media in one place and synced over my devices. But why do you have to make it so difficult for me? Complete bloatware.

Fortunately Apple don’t have any competition in this space at all from younger more agile competitors. 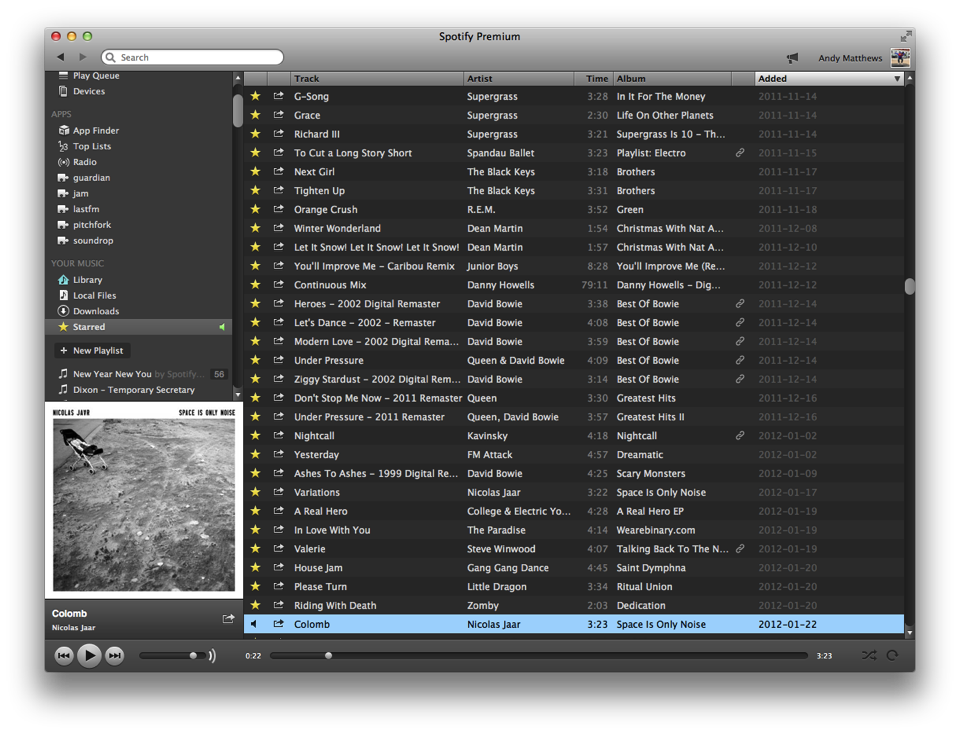 With Apple you kind of expect pixel perfect attention to detail. But then a blog I follow spotted this and it’s been annoying me ever since. 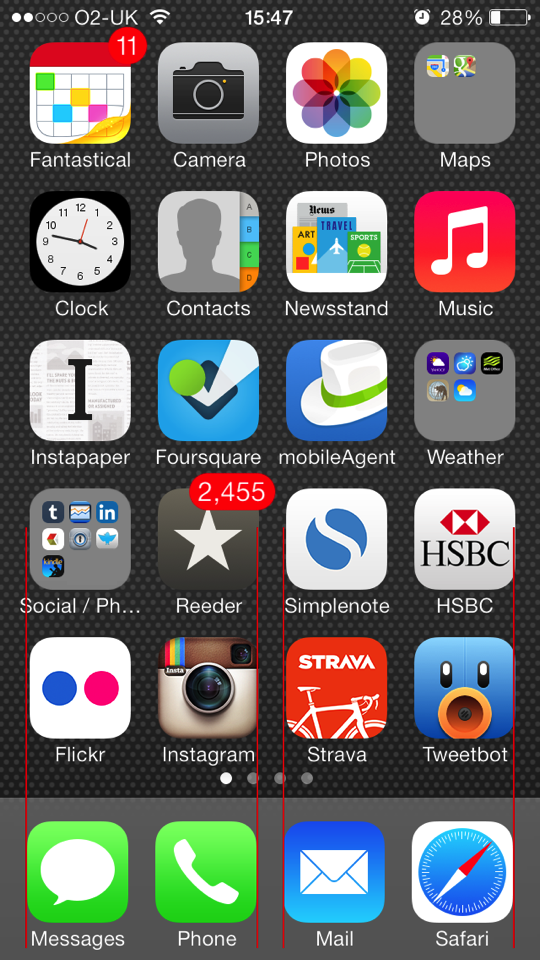 And a little closer. Shockingly sloppy for Apple. 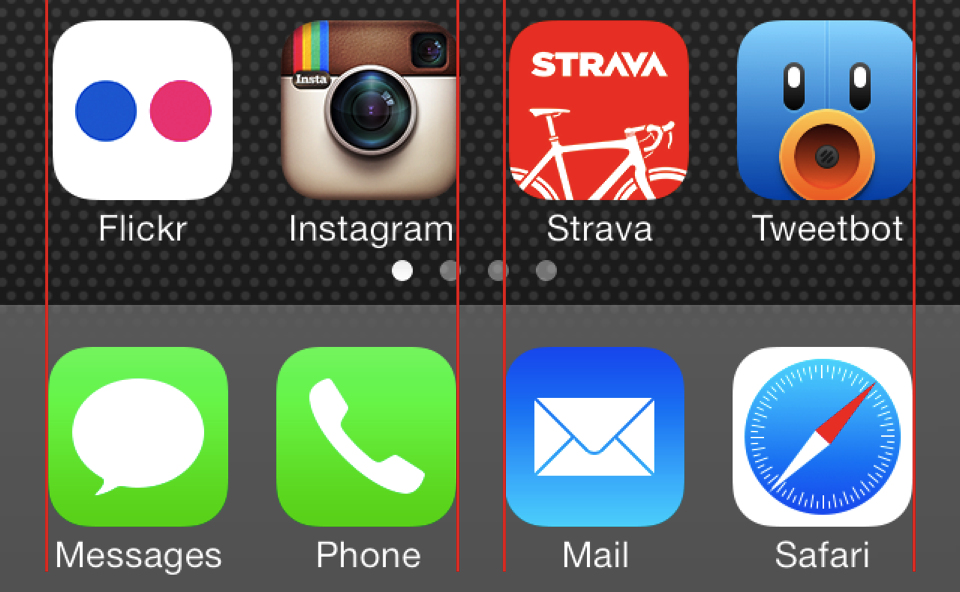 I wish Instagram would sort their icon out too. That’s another thing that annoys me.

First rule of the internet has to be “Don’t scroll past the end of the article to the comments”, especially if it’s an article that involves Apple in any way, shape or form.

This superb clip makes a wonderful mockery of the utter bollocks that gets written online, in this case YouTube.

Hard to believe that iTunes is getting on for 12 years old. I remember first using it whilst finishing up my degree on my old PowerMac G4 400mhz albeit with a very limited selection of MP3 files. Ars Technica have an interesting run down of its development.

For me the most interesting thing is the evolution of the GUI. iTunes has always been a bit of a testing ground for UI developments that then sometimes made it into the main design of OS X, some with more success than others. 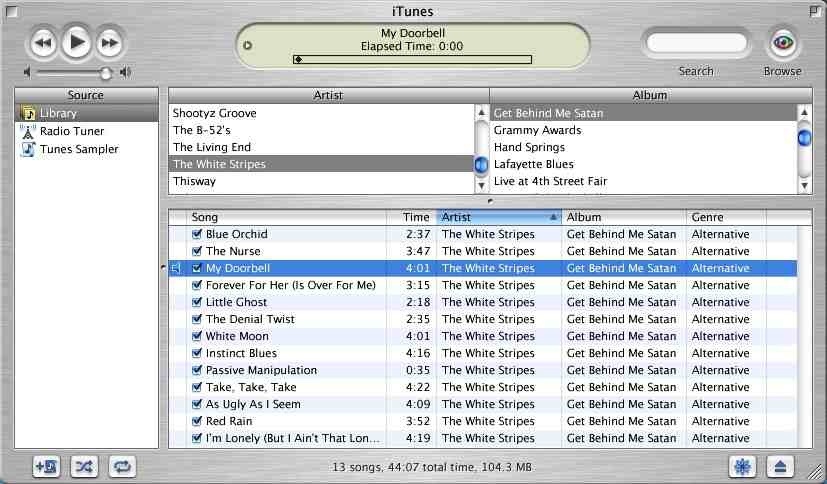 Despite all the hoo haa about them (which essentially comes down to the base data quality) I was pleasantly surprised at how good the turn by turn directions were this morning. I drove into work mega early to avoid the traffic from Cambridge after getting back late last night. I set my destination then let it do its thing whilst also connecting the phone via Bluetooth to the stereo. It was smart enough to interrupt the radio to tell me where to go which meant no more holding the map on the steering wheel and far easier to concentrate on driving.

My only criticism so far is that the location of Tube stations in London isn’t as clear at more zoomed out views. 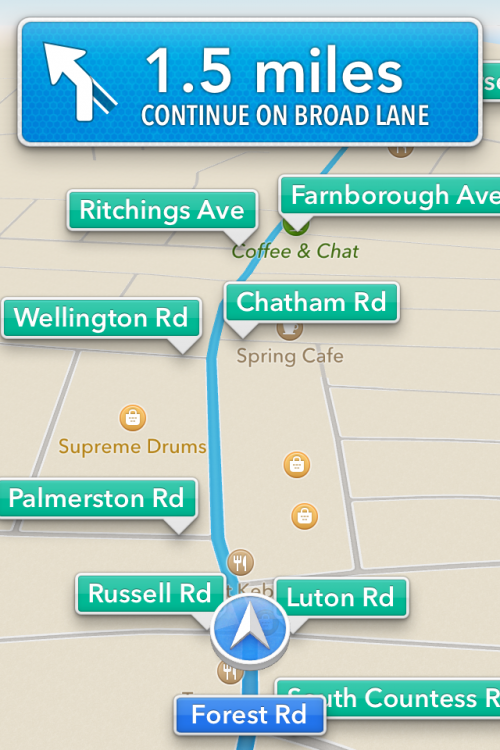 The demo for the new seemingly supercomputer like technology in the new iPhone 4S looks pretty incredible. Whether we’ll all start talking to our phones is another matter but the demo is nonetheless impressive. Set an alarm for 30mins, what’s the weather like in X, text my girlfriend to say I’ll be late. Bonkers stuff that it works at all.

However with all these things there’s got to be a downside for us simple humans. I showed the demo to a guy at work who sent me this in response. He’s got a point.