I’ve got a bit more into MTBing this year and had just started gearing up to doing my now usual winter training routine of singlespeed mountain biking at the weekend mixed with turbo training during the week and the usual commutes. It helps to keep fit and more importantly, keep safe and off the ice on the roads. Sadly a broken clavicle has killed all of that but it does mean that I now have time to catch up on some writing.

There’s usually one of two locations available for a little weekend jaunt either Surrey Hills or Swinley Forest both an hour away in the van or on the train. Surrey is more natural and varied with a load more lumps, Swinley is a bit flatter but rolling with a series of man made trails. Swinley is a bit more reliable in the wet and you’re not going to ruin the trails like you would be at Surrey. Having said that Swinley can get a bit boring as it’s the same loop each time. We’ve tried extending the loop out in a few different directions searching for the locals favourite trails but always felt like we barely scratched the surface and didn’t feel like we’d really found much.

A few weeks back Anna dropped me a message excitedly saying she’d found a few more along with a link to her ride on Strava to turn into a GPX to follow. Sure enough that Sat we headed out to have a look around. 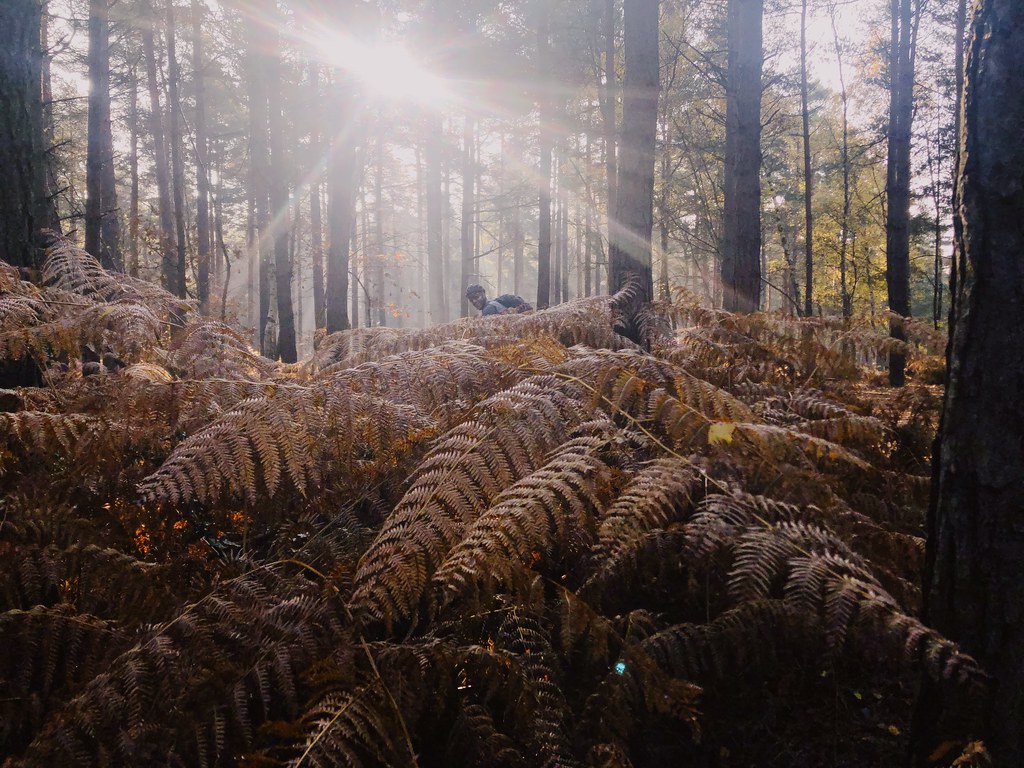 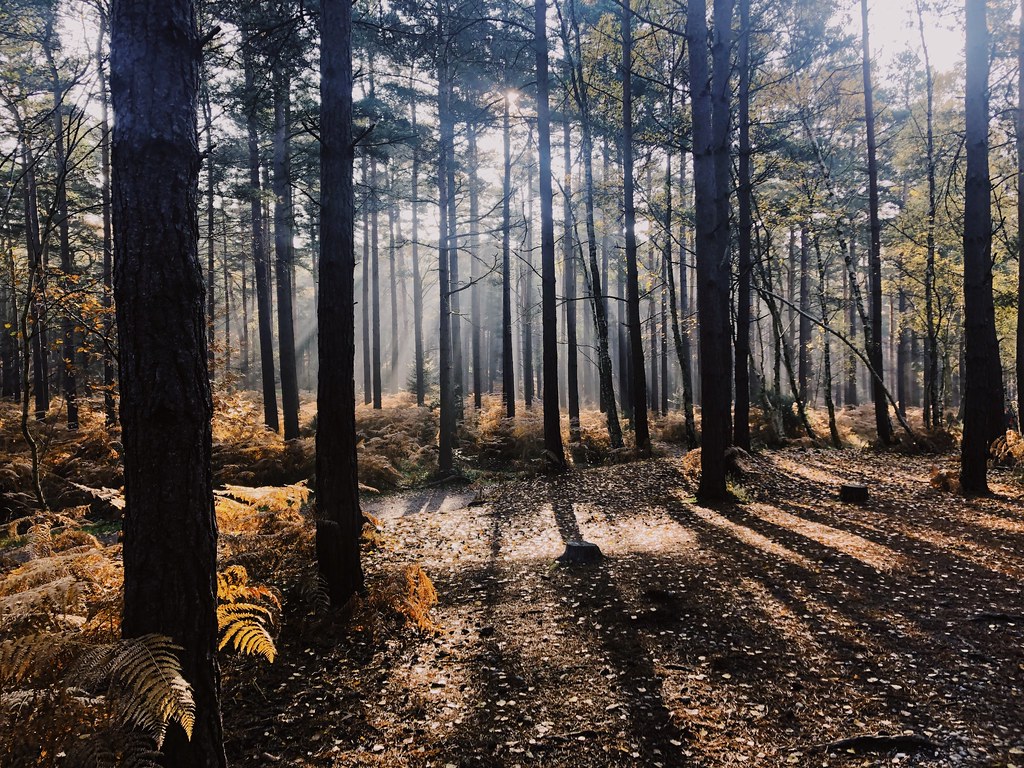 We were treated to an incredible autumn day with shafts of light and mist in the trees. We didn’t really make amazing progress as there were so many photo opportunities and it was simply too beautiful. We did the first few bits of the trails before peeling off to find these new ones to the west of the red route. 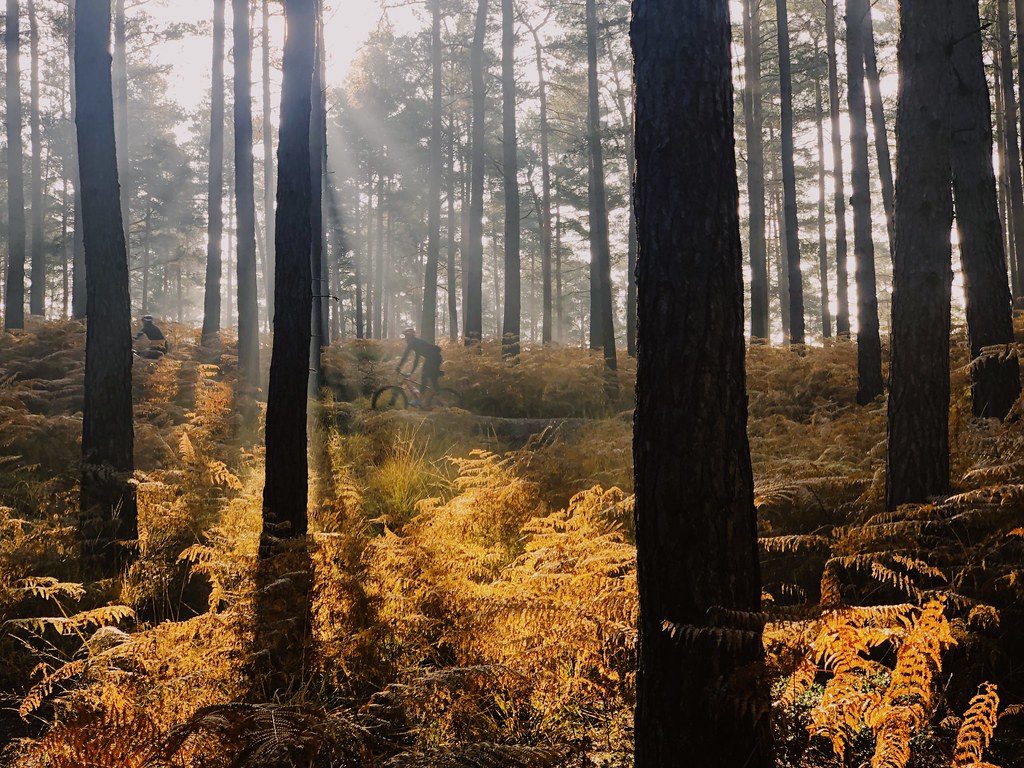 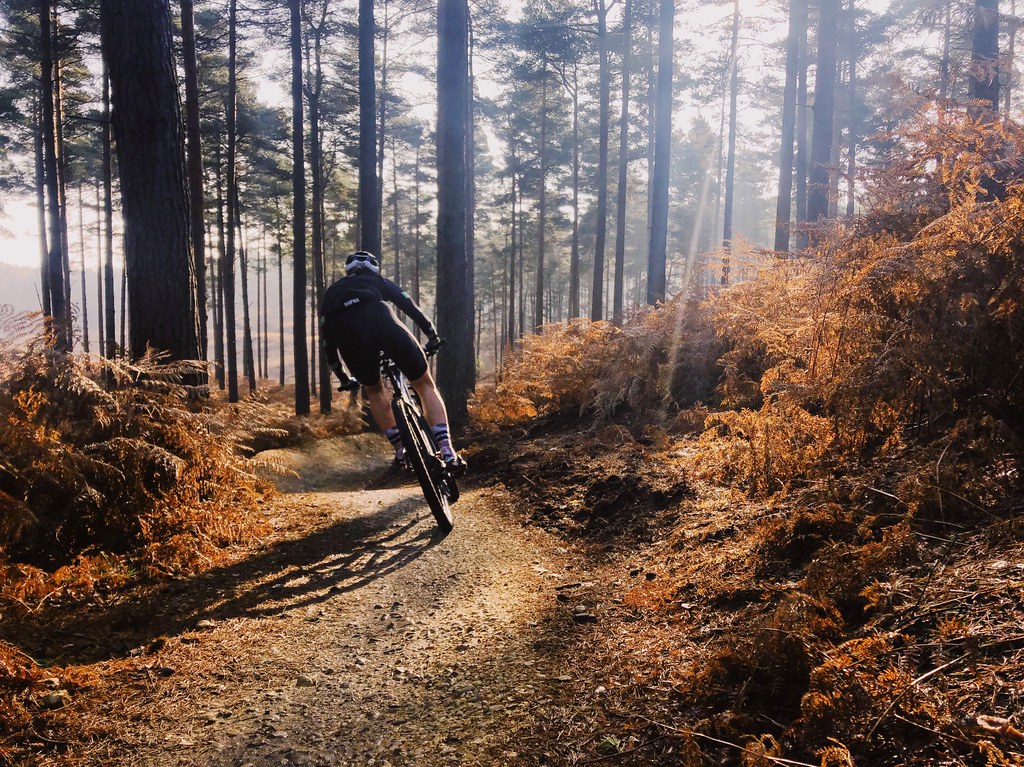 The first bits of the new trails were really nice and natural. They appeared to be quite fresh and we just about followed the track through the trees with leaves covering lots of them. Nothing too technical but nice and twisty. Not too fast either as I was trying to follow the trail on the Wahoo.

After a while we rounded a corner and came upon this flowing little twisting section. Of course it needed riding a few times and then getting the phone out to take some photos. 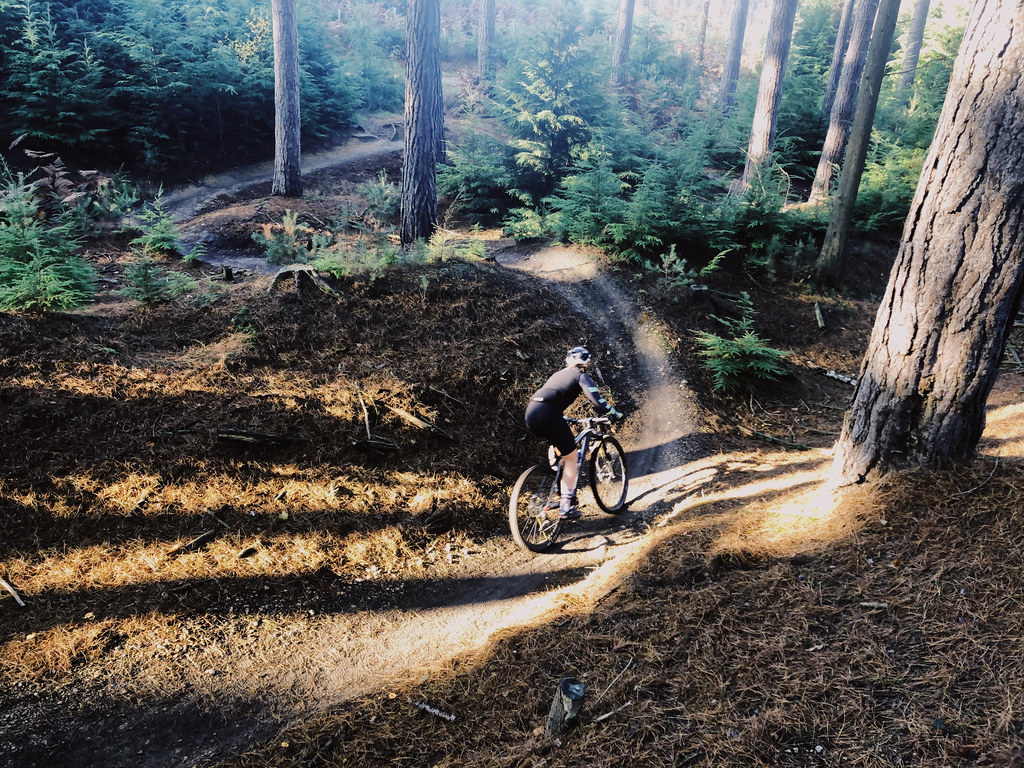 Round the next corner were a few little roll ins. Of course Andy just sent it straight away, I rolled it a few times before doing a better plop. Bash rolled it without too much issue and then I spent some time with Agi talking about the best way to ride it. Setting your weight, where to be on the bike, speed, line choice and so on. It was great to see her roll through it and then do a few others with new found confidence. 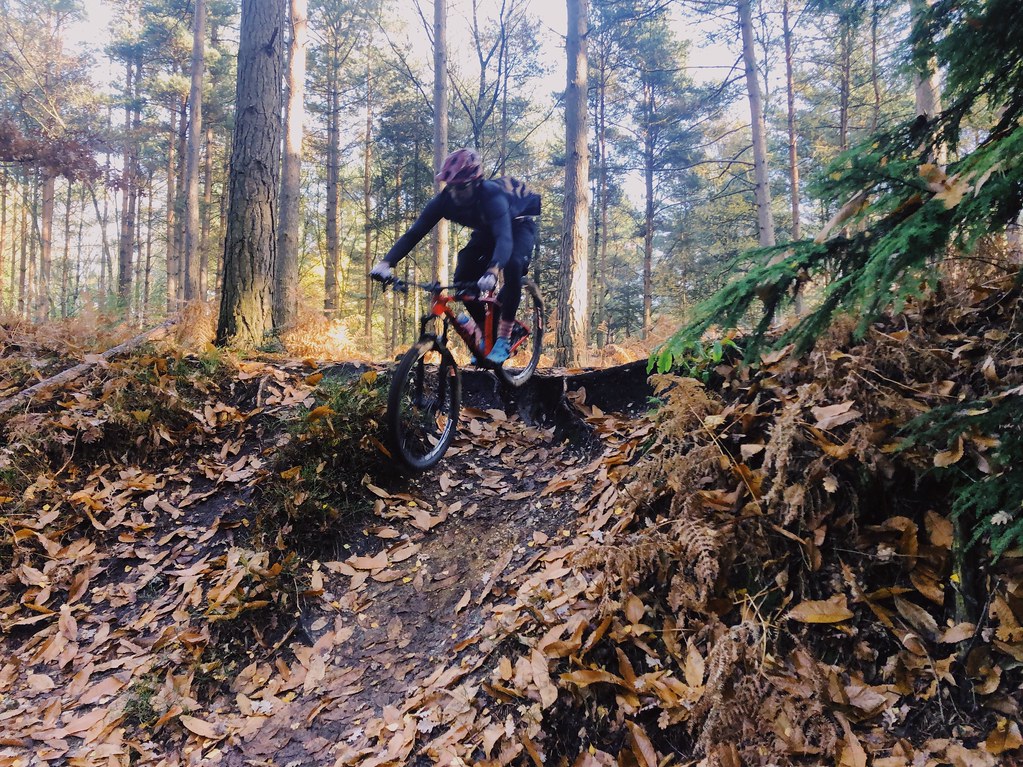 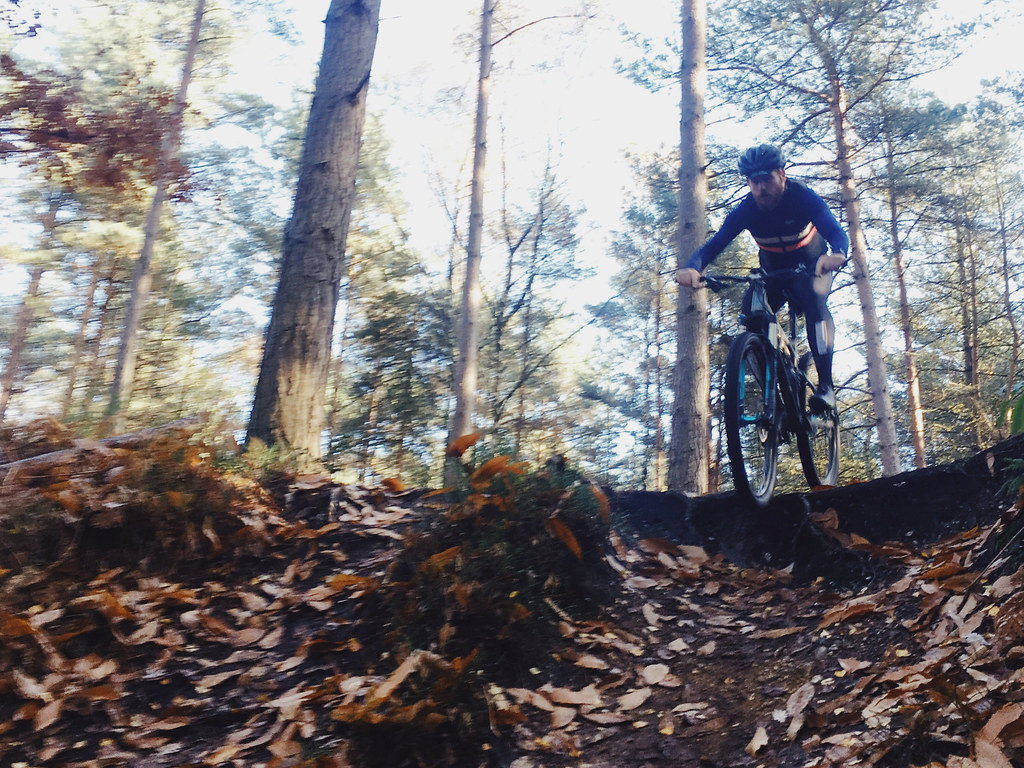 After that it was out towards where we started again via a lovely steep gulley and steep roll into the path back. 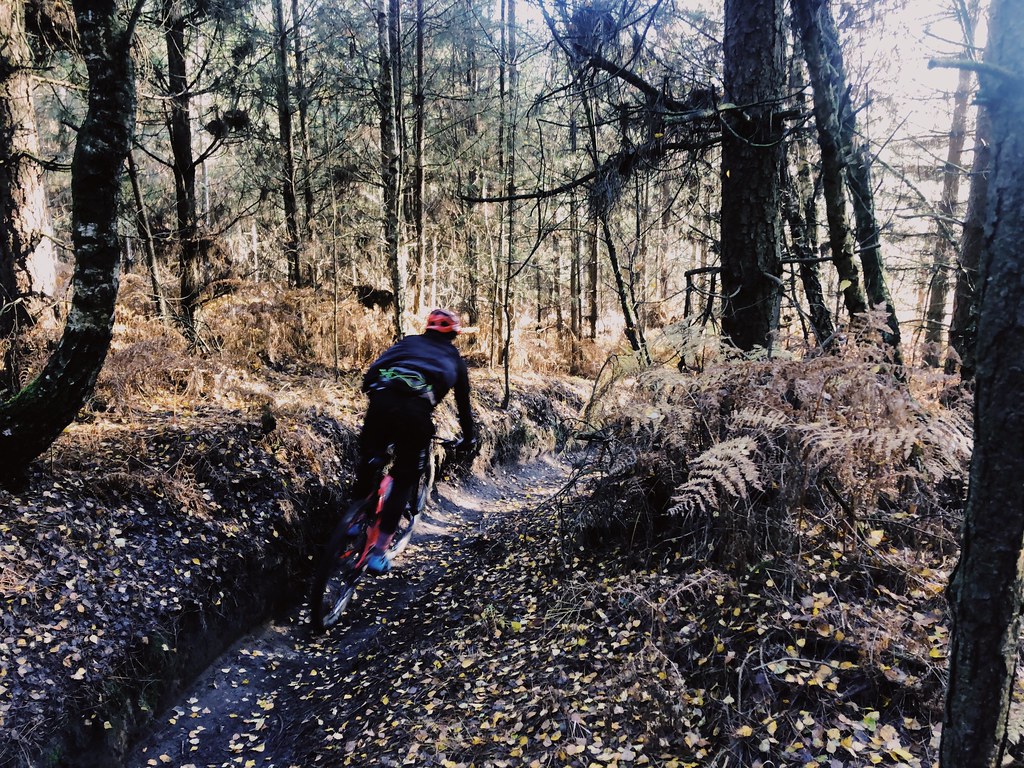 There seems to be loads more scope for riding out there and would like to go back and explore some more (once fixed up). It was good to do this then go back onto the main trails and do the usual loop. As well as having more fun it’s also good to add a bit more distance to it.

Also, those photos don’t look quite as good on a laptop screen than they did on the phone.