Back in January I posted about a Tumblr blog I’d found via Twitter – Need some design inspiration? This collection of images and format inspired me to start my own version entitled – architecturepastebook.co.uk.

At first I wasn’t sure whether I would use it or whether I would become bored with it. I’ve embraced it entirely and have, shock horror surprise surprise, become a little obsessive about it. It started out as a way of recording a series of precedent images I was looking at during work time. Rather than save images to a folder on the server and lose any idea of what they were or where they had come from, I would chuck them at the Tumblr. We would then refer back to them later in the day when we were discussing design progress or the development of the architectural language for a series of construction details. Previously I had started to use the Gimme Bar web service but hadn’t connected with it in the same way really. For some reason the Tumblr (with the chosen theme) seemed a better way of doing it. Also as it was public there was a certain pressure to keep the quality up. 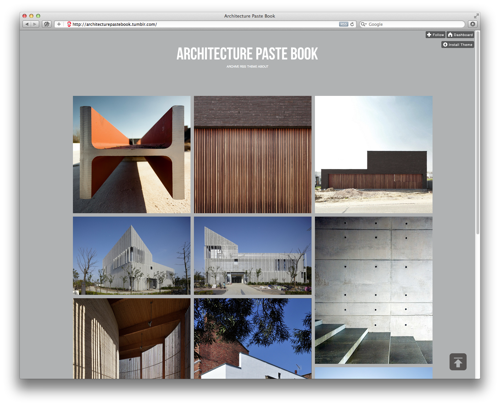 architecturepastebook.co.uk – something to dip into for inspiration?

The blog has grown from a semi-personal scrapbook (or paste book) into a slightly more public semi-curated archive of great Architecture as well as the occasional inspirational image. The way Tumblr works is also part of this more social feel to the site as people can “reblog” posts. I can also do the same to theirs which allows me to re-use content I like from others, it’s through setting this up that I’ve really engaged with Tumblr. It’s become a place to record images I’ve seen during the day from the likes of Dezeen, ArchDaily and designboom as well as a few select users and groups on Flickr. Sometimes I will select a series of images from a completed building which I think is worthy or often just a single image that provokes a response such as a texture or composition. Sometimes it’s just nice concrete which I’m a complete sucker for.

I’m intrigued by the idea of a visual archive that can be looked back upon, something along the lines of day books or sketchbooks that I keep at work. I’m obsessive about these and love sketching details or small areas of plans or sections. I think we also suffer from sheer overload of visual information – “Where was that great detail in the magazine from last year? Oh I saw something like that a while ago, it was interesting how they solved it” etc etc. This is my way of addressing that and trying to keep inspiration to hand. The way I post also allows me to keep a link to the original article which I can refer to for further information. 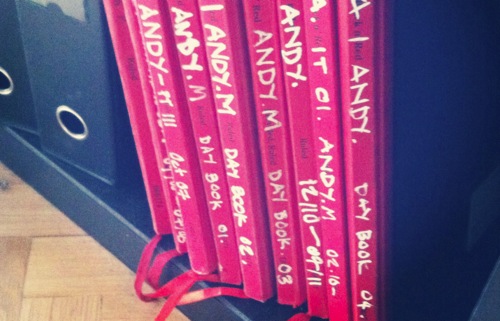 As an Architectural Photographer I’m also keen on constantly upping my game and viewing imagery to critique and make my own work and techniques better. This constant viewing of other photographers work has also made me far more critical of the the visual representation and also the actual architecture that I see. This is also something I’m also keen to document – the stunning image or the play of light that the photographer recorded, the unique angle or way in which it was post processed or the composition of the image and so on. 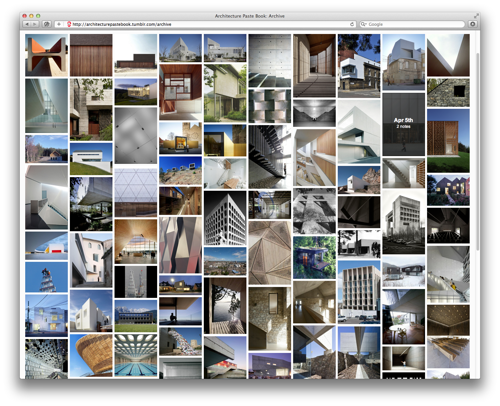 Tumblr as a visual archive.

So, another website to maintain and curate but something that provokes a critical appraisal of work and somewhere to keep it all. Want to add something – an image or a project?