The random kindness of (drunken) strangers

I’ve been off the early morning sessions for a bit but managed to drag myself out of bed yesterday at 5am to join the RCC hills ride. I opted for the ‘stylish’ over fast group and met at the cafe for 6am for a quick filter coffee before heading out to the posh north hills of London.

As we congregated outside the club a series of drunk guys came past. One guy lingered a little and started peeing in a doorway. I’d already judged him as a bit of an idiot but then he started having a bit of a laugh with the delivery guy who was about to try and deliver in the doorway he was peeing in.

He finally turned around and clocked us all in our kit.

Night ride is it? For charity?

In my usual slightly sarcastic manner I said we were riding for charity. Without saying anything he fumbled in his pocket and pulled out two fifty pound notes, a twenty and some change. He then thrust a fifty into my hand and then stumbled off into the night to catch up with his mates.

I couldn’t quite believe it but it was legit and went straight into the bank. I’ve donated it to the Manchester to London fund. So thank you to whoever you are and I hope your hangover wasn’t too bad. 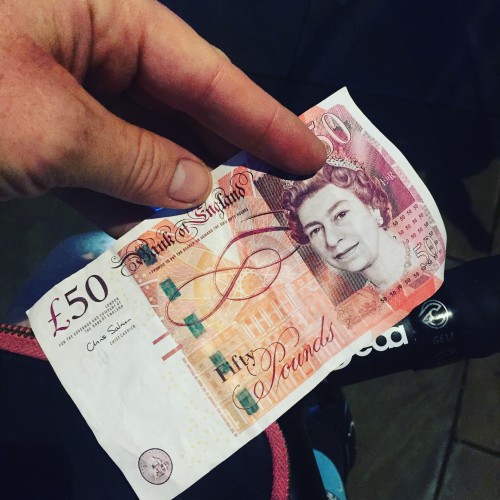