A month or so ago I joined Brixton Cycles Club after doing a fair amount of research, which mainly involved talking to a bunch of different people about what makes a good cycle club as well as knowing a few people there already. That and the fact that they clearly have the best kit in London persuaded me to join.

I went along for a first session and enjoyed it. It was a warm sunny day and it was pretty busy. A lot of the clubs have been swelling in numbers recently and Brixton is no exception. So that ride ended up with around 30-40 people in my rough estimation and although it was a large group it was well run and well disciplined. It was a nice day out, we had a good stop and chat, eat some cake, drank some coffee and then came back. I rode a few lanes I hadn’t done before and met and chatted to a few people I knew as well as a few other newbies like myself. After getting back I paid my fees and promptly went down to the shop the following day to get my jersey which I’ve worn with pride since. However I’d also then had a number of other rides planned for Sundays which meant I couldn’t go back until today.

So even though there was a forecast of constant rain for the whole day I turned up this morning at cafe St Germain at Crystal Palace expecting a far smaller group. I wasn’t crazy about going out but wasn’t going to do anything else really. Predictably there was hardly anyone there, only six of us including myself. But this didn’t matter and it made the group more intimate and enjoyable in many ways. The rain and the cold was less so. 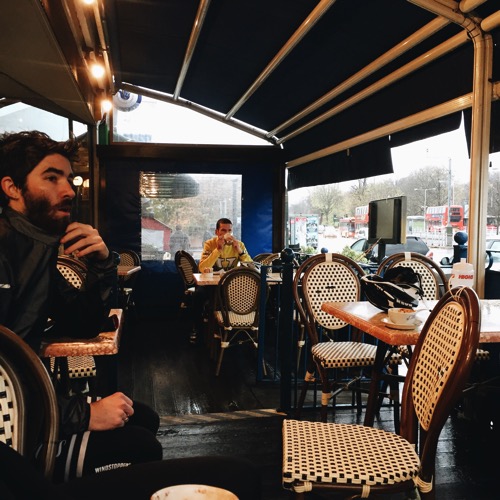 I’d prepared properly and dressed up in as much winter clothing as I owned as well doing the cling film under the overshoes trick Leo had recommended a while back. The previous was quite mild and warm but today was freezing with the added benefit of pouring rain. I route was briefly discussed along with agreeing to not stop and get cold at a cafe. And off we went into the rain. It wasn’t that bad at first really and once we got going seemed to be ok. I wished I had worn a winter hat though to protect my ears.

We still managed a chat whilst riding and the occasional stop to regroup and roll our eyes the weather. We started looking for decent hills to warm us up and get the blood pumping again. That was fine until you started pointing the bike up hill and felt the rear wheel slipping as well as struggling with cold knees, even in winter tights. Large sections of the route were flooded with puddles over the entire road. I was thankful for mudguards and discs although the rear brake didn’t seem to be doing much by the end – I think this is down to cable stretch though. 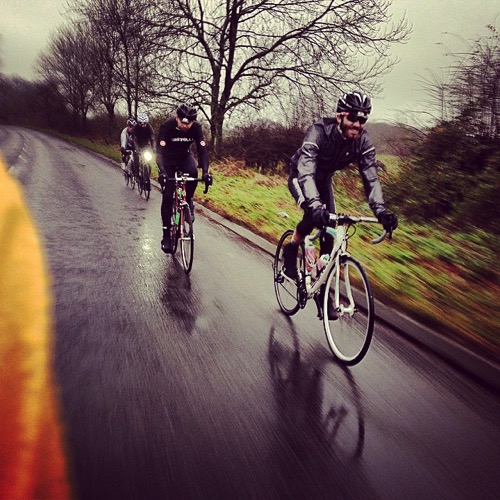 It did all seem a bit silly at times but I strangely enjoyed it all, especially meeting a few more people to chat with and share a few kms rather than slogging it out on my own. After we got back to Crystal Palace I convinced Will, Richard and Celia to come for a coffee at Daily Goods to warm up. The coffee at St Germain is terrible but it’s a ritual I guess so can’t be too harsh on the place. Daily Goods allowed us to stand in the front bit and drip everywhere whilst we ordered and consumed multiples coffees as well as some food. Whilst we were standing there a young woman came over to Celia, seeing that she was cold, and offered her a shawl which was pretty sweet. 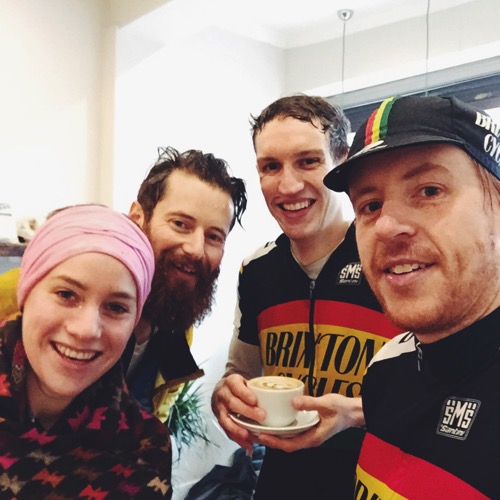 Overall a pretty decent day out on the bike and hopefully makes amends for not showing up at the recent club runs. I’ll be back again next Sunday but hopefully slightly less damp. 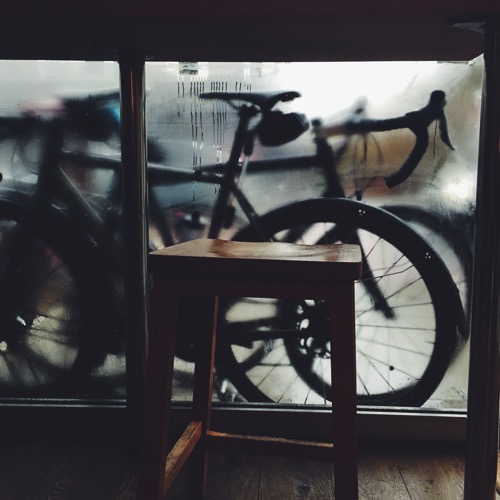