A new addition to the family

“Let’s get a cat”, Emma said to me one day a few weeks back. Sure I said, why not. The landlord said yes and we went off down to Battersea Cats and Dogs home to have an interview and be checked out as a good home for a rescue cat.

Both Emma and I had family cats as children. My sister and I had two farm cats when I was 10 and she was 7, we named them Topsie and Tim after a series of children’s books we used to read. Mine was a bit stupid and kept getting in fights with cars, unfortunately he lost one of those fights in the end. Topsie lived on though to the ripe old age of 22 though! We had great fun as kids with them and it was lovely coming back home to see Mum and Topsie in later years.

So we both kind of knew what to expect when we visited Battersea. Due to us having a one bed flat without a garden we were limited to which ones we could re-home. We were told that it would likely be over ten years old with possible health issues like FIV or a heart murmur. That didn’t put us off really as it’d be nice to give an old thing a home to live out its retirement. So we passed all that ok, mainly due to Emma working from home. Unfortunately they didn’t have anything in stock that they could re-home with us at the time. We weren’t fussed on the model really.

We kept checking the website each day and ended up seeing one that could work but had already been reserved. We emailed the Brands Hatch centre and they said they had a 13 year old female called Sunny who hadn’t been added to the website yet, and would we like to see her. Of course we said and headed down last Saturday to meet her. Both of us were a little cautious in case it didn’t work out and we didn’t come back with her or there were any issues. Fortunately she had no health issues at all and although shy at first, was very affectionate. We filled out the forms and took her back home that day.

We were warned that it could take up to a week for her to come out from a safe spot, like under the bed, to say hello properly. So we left her alone in one room with food and water and put the heating on. We went in a few times to get her used to our voices and then left the door ajar in the evening. She did a few laps of the flat, sniffing everything possible in sight and then jumped up and joined us on the sofa, finally settling down on the top of the backrest for a nap. She’s been getting more and more confident since and is real pleasure to have around. She seems to hide away a bit during the day then spend more time out with us in the evening. We think this is just due to an old routine and will be out all the time when she’s settled in fully.

Apparently she was originally homed from Battersea in 2000 but it’s unclear why she came back. The chip details were out of date and her original owners couldn’t be traced. So we’re keeping her original name of Sunny, which seems somehow appropriate for a black cat. She’s very vocal and a real sweetie. 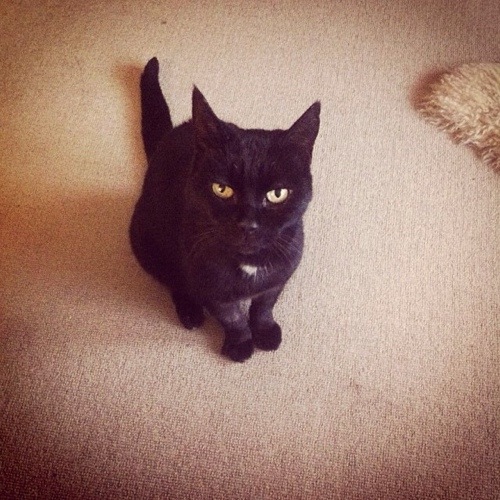